Deflation is a natural part of the economy cycle. Same as inflationary period it gives us some great break-even technology that changes the world.

The deflationary boom started in 1980 and we all can admit the most beneficial part and technology break even point was :

This is how I understand the deflationary cycle, but of course around the internet, cloud and the fact how easy information might be spread across the globe benefits most economy sectors – medicine, logistics and in general everything.

This technology created deflationary environment as people are no longer needed, as everything is transformed as SaaS (Software as a Service), PaaS (Platform as a Service) and other fancy names which have created deflation of deflation. Everything is scalable with zero second reaction/response time and we’re dreaming about robots who will kill us all. Our brain automatically is switching to absorb so many titles, and articles are being read in an “F” pattern (our brain has to learn that during the Internet phase). First 2-3 lines, later we scroll to the middle and to the end. We can’t read books, because our brain needs some transition phase. Just read a book after days spent in the Internet. First 20 pages you have no idea what you read about! The Internet makes us more “stupid” in fact if we have no idea how to use it, and being more “stupid” is also a part of a deflation!

But deflationary phase always transform to deflationary bust, same as inflationary environment to very high (sometimes hyper) inflationary bust. From a certain time the society just puts everything on the table to enhance the break-even technology (aka The Internet) and we’re going beyond rational scale creating too much, too complicated, too ambitious with too many players on the market. Deflation always wants more. It’s like you pour a water into a glass which has a limited capacity (it’s just a glass), but people start to imagine how beautiful will be if we put twice the amount of water into the same glass. From the physical point of view, the basic law of physics does not allow to that, but market and economy imagination combined with psychology believe that is possible. It’s a miracle = often called Goldilocks 2.0.

In deflationary economy CBs (Central Banks) playing key role, reducing rates to levels below which people start to think they can not only double the amount of water into the glass, but even tripple if they make quantitative easing. To big deflation (too low rates) creates out of scale dreaming. If you take a look at most common companies you’re going to see most of them can’t make a 1$ profit, but their ideas are blowing up minds. Flying cabrios around the Earth, plug-in LAN cable into your brain and so many e-clouds, e-heart detectors, e-bullshit tests or e-detectors if you can properly sit on a toilet. If you take a look deeper – probably 90% of those “inventions” are not only not profitable due to deflationary fight between the overcapacity which is the equivalent of double water into the same glass, but they are useless, while we believe they do change the world. Now you see how “stupid” we become if deflation will go too far.

The response for deflation is the same. More money printing because CBs believe it can create inflation and the same time the debt value will be depreciated. CBs also should understand that money printing, and also inflation creation is not located where they look for. At the end of each deflationary cycle money printing and low rates is a pre-requisite scenario for debt deflation, not inflation.

What actually CBs do. They print money and buy bonds of the cashburning machines who are fighting against each other due to overcapacity created by CBs who allowed this overcapacity to explode tripling the amout of water in the glass providing more bond buying believing it will solve a problem. The result?

So we can’t consume more even on 0.00% rates across the globe or even negative, but more QE will allow to increase the overcapacity in inventories which can’t be sold?

This QE money is being obviously burned in an unproductive way, because you can’t overcome overcapacity with higher overcapacity created by money printing, buying bonds of companies who are fighing against overcapacity.

Finally this record amount of money must flow somewhere. Of course it’s not flowing towards middle class again, but I’ve already explained that in previous articles, but it just inflates the asset bubble (housing, stock market) creating “The Wealth Effect”. 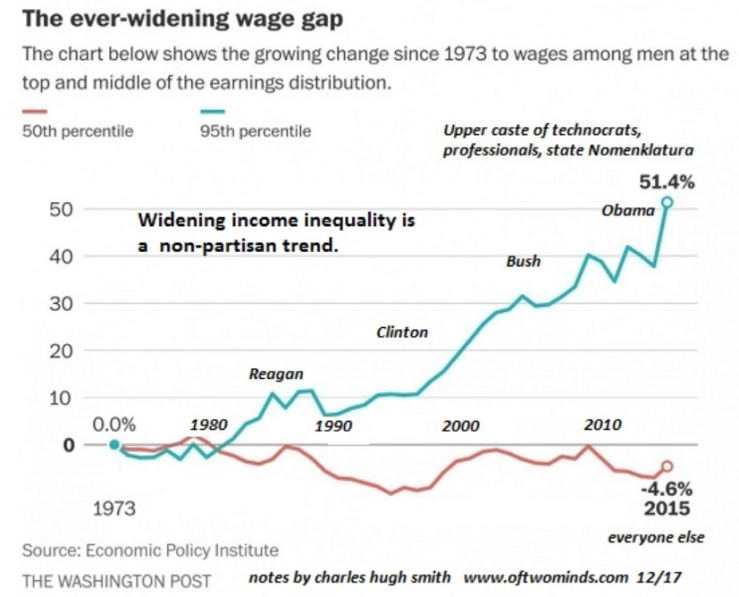 Just take a look what happened after 1980 when inflation has turned into deflation. So many young people dreaming about being B$ but take a look at this chart. The biggest probablility you could have become a B$ was in 1980. After that moment your chances were dropping and if a person used this moment in 1980 buying everything they are probably now mostly M$ or B$. If you take a look at Venezuela today. Venezuela is ending socialism and hyperinflation turning towards capitalism and deflation.

We shouldn’t afraid the deflation unless you are a Central Banker, because if deflation will blow up he and his friends will probably go to jail, but that’s a different topic. If they will be lucky they and their buddies will all lose their money. Deflation needs to be controled by CBs. For example keeping rates steady and not lowering them too much, but of course it’s a beautiful unreal world. Slowly healthy growth, or fast unhealthy, and later we will think how to manage that. Of course we select #2, because nobody has time to wait such a long time. 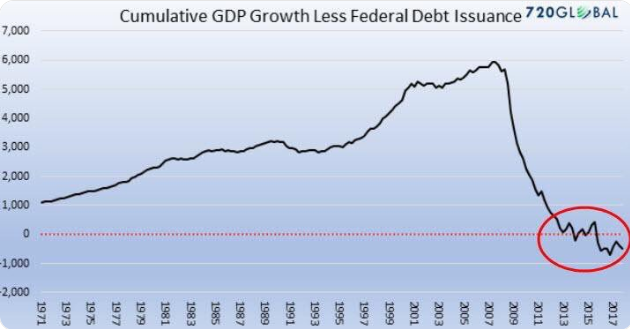 Deflationary phase might be called “The Wealth Effect”. Stock market booms, housing prices are skyrocketing. People are chasing each other taking credits for consumption or housing or stocks, despite their deteriorating wages, but on a paper the wealth looks really good – We own and it’s getting paper value. Prices of housing market (housing + automotive are key leaders in growth) can go up due to :

But this demand can be steered by 2 things.

How can you steer the supply if by more QE you create exponential overcapacity? Will you destroy all houses to create new one? Well you can it’s called a war.

CBs still trying to stimulate the economy but they reached the top packing the water in the glass. Now they are trying to pack x4 or x5 amount of water in a glass – really hard task I must admit. Next move looks ridiculous. You love -5% rates, maybe -10%? Maybe you do, but will they work? Will you need 5th car, 2nd fridge, 5th house? You can only drive one car, live in one house and eat from 1 fridge. Will -5% rates create bigger plunge in new births?

The society is getting older and we can’t replace them. Deflation requires infinite amount of children due to infinite amount of credit creation to consume more and more and more. We should also be aware that it’s just an ideal world, because deflation from the other hand forces society to have less children. The lower the rates = the lower amount of births. Why? Hard to judge, but probably weaker wages of 90% of people + bigger amount of debt is a killer for having more children in the society. Top 1% of people can’t create the whole new society, because it will require having 1000 children?

Deflation turns into bust when rates reaching so low level that the miracle of triple (or higher) capacity of a single water glass is being exposed. Just sit and try to imagine what do you need to buy. New car every 2-3 year, new house? Well most of those dreams are caused by 90% of society who not only can’t afford it due to end of deflationary cycle. The paradox of deflation is based on the fact that low wages and big debt with asset inflation will make 90% of people more happy so they can fill the glass with a quarduple capacity and they will consume at the end themselves (probably dying young due to lack of proper funds as all went to housing and automotive – no more proper healthcare).

So many people can say we have a great house, great car, but for 90% of people it’s just a pure debt, so as long as consumption is progressing and we still have some missing people from this 90% group the prices will go up supported by CBs leading overcapacity in housing market.

Stock market and housing market clearly say economy is great but our 90% of people just don’t see it. The ultimate bust kicks in when they make a strike and stop spending. Stop buying useless things and “The wealth effect” will be exposed as a bubble which another time decimated dreams of 90% of society, but this time this bubble will hit the top wealthiest 1%, as their great products will be exposed as useless counterproductive, with no demand what will be shocking surprise to everybody including mostly 1% wealthiest, who will be forced to recognize, that the glass can be filled just to its maximum capacity and no more.

If we are dealing with overcapacity end of consumption and top of deflation :

Despite many problems, I do believe CBs in panic will allow MMT policy, but CBs as usual will react too late, as the key problem here is the end of Central Banking, if they lost the battle with global economy, having almost zero tools available. They think they are fighting with another typical recession :

But they don’t (or don’t want to) understand the background.