If you take a look what’s going on around the globe more and more we can predict what might happen. If you open probably a basic economy book you know markets and globe are going in cycles. It takes some time for them to make 360 degrees turn, but we live in a debt-based system and we can’t have prosperity in the economy without proper busts. The key long term cycle which I’ve been looking on is of course famous Kondratiev cycle. It’s not so complicated. In general it says that each decade of debt deflation creates something really “amazing” and revolutionary.

Almost every 50 years there is a switch from deflation to inflation. If we consider the last cycle 1929-2018+, which I think is wrong here, because the date 2009-18 should be 2018-202x+ what will be explained later on, but both phases creates some break-even points in technology. Debt bubble in 1929 allowed mass production implementation. We had roaring twenties and each wanted to buy radio or washing machines, but later in running inflation, later 1973 oil crisis we had mobility “bubble”.

Not hard to observe “Runaway inflation phase” where according to the cycle “Stocks make no progress”. Weird that also deflationary bust is created with just 3 crashes. First – technology crash, Second – financial crash, Third – total bust and switch phases to inflation. Second crash is always financial crash – it’s like a big warning for the accumulated debt. This is a moment where the only one rescue is 0.00% rates and QE with no way out. This is the biggest bubble in the cycle, where consumption of useless products is just reaching stratosphere, same time we can hear that prosperity will last forever. No it won’t.

The most important part of the disinflation is the fact that it benefits only the wealthiest.

It’s really easy to observe who benefits most in which phase. So deflationary phase started in 1980 and lasts till 2019. We easily can see a bottom of 0.1% wealthiest vs bottom 90%. Saying other words. Economy forces big inequality created in disinflationary period to rob 0.1% and give the bottom 90% the power. How it happens? Well it’s quite easy and it’s a psychology. If you are 90% of people with tons of debt and weak job (disinflationary period kills well paid jobs) you are frustrated and want to change something. 90% of people vote has better accuracy than 0.1%, so you become anti-establishment and vote on populists who promises so stupid things, but they are the only one choice for you to make a change of this imbalance. Biggest populism is always at the top of deflationary phase just before huge debt blow up. 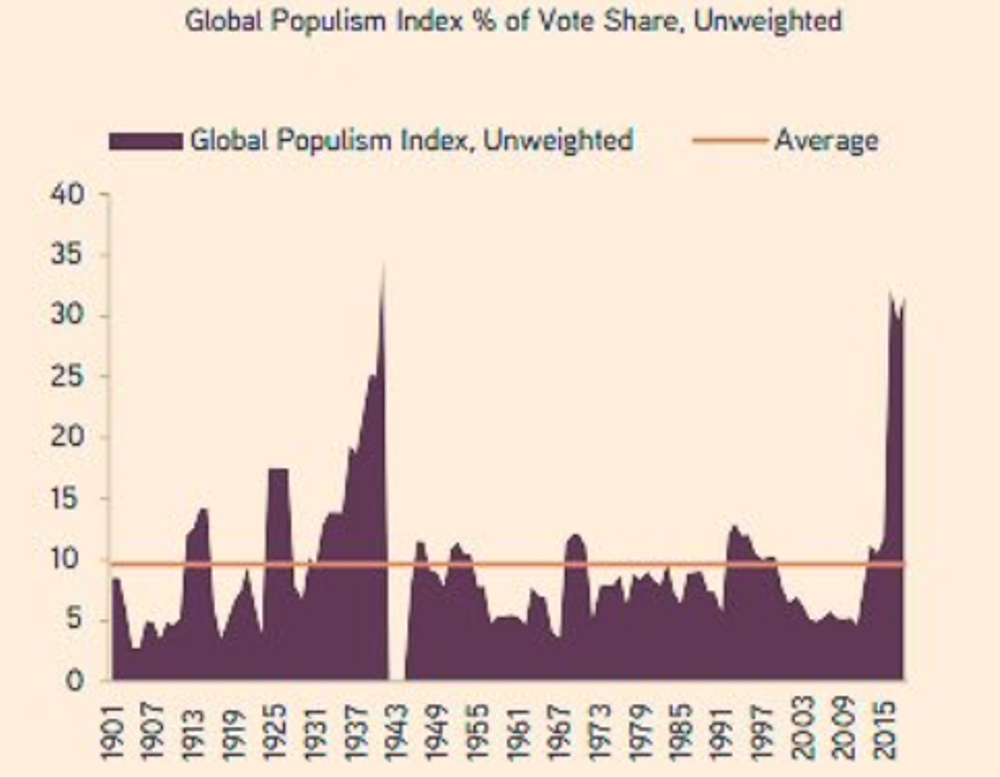 Do you see spreading socialism around the globe in 2019? Maybe nationalism? Right-wing parties? Dictators? Well that is just a confirmation that debt bubble is just about to blow up. If we come back to 1929, we can see exactly the same symptoms during the whole economy. Technology crash, Financial Crisis, FED steps in, rates going to zero and prints money to stimulate the economy inflating the biggest asset bubble during 100Ys. Once it blows up people lost everything and in most situations they are not able to get away on time.

So what happened in 1929. Well the deflationary period driven by cheap money and debt created such big overcapacity that inventories raised to levels where prices had to fell below the point of profitability. So low rates created so huge “over”indebtness and economy driven by zero rates just consumed everything what it could and suddenly consumption just dropped to ZERO and created economy shock and Great Depression, because this overcapacity which was created to produce so many new cars (because sales will always go parabolic up) fueled by 0.00% rates just dried up consumers and they couldn’t buy more cars. Inventories started to pile up, people were fired and it began. 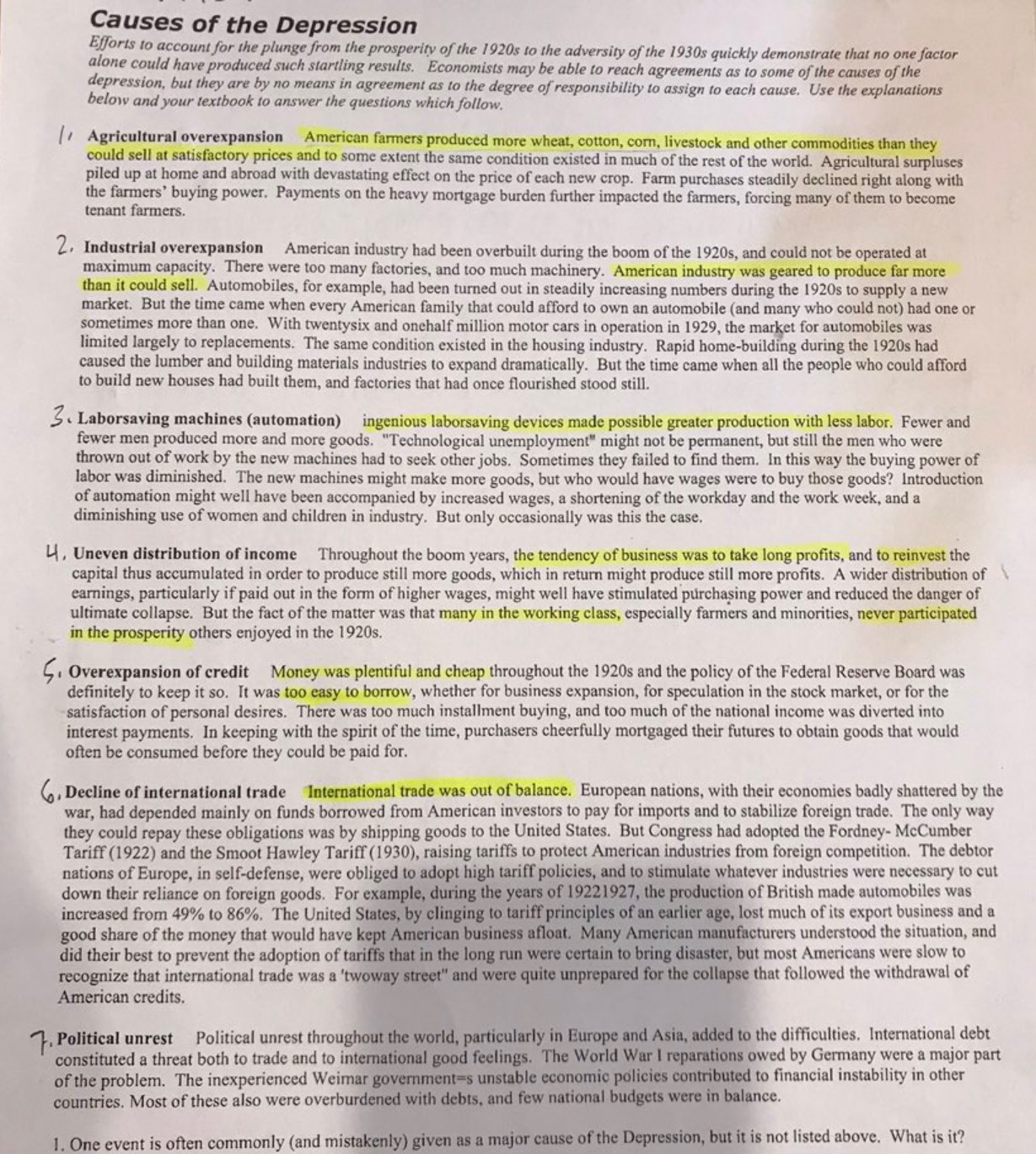 If we take a look at causes od 1929 depression vs 2019 we can easily check each point and comment :

All seems to be on exactly the same places like it used to be 90Ys ago. We won’t avoid debt bubble. The Central Banks paradigm is around us and I think it’s one big lie. Each bubble has it’s own paradigm and it seems the final bubble believe too much on QE that will bring recovery. History shows that QE works only once after rates drop to zero. It creates biggest bubble in the big cycle which deflates. The question is if Central Bankers got a plan or not. We see first symptoms :

Sometimes we can read about going cashless, because rates can be dropped to -3% and you can’t take your money out of the bank, but history shows once QE is announced it seems to be the end. Lowering interest rates to propel more misinvestments is not a cure. The amount of zombie companies created at the end of deflation is just epic. 15% of all companies can’t earn 1$ 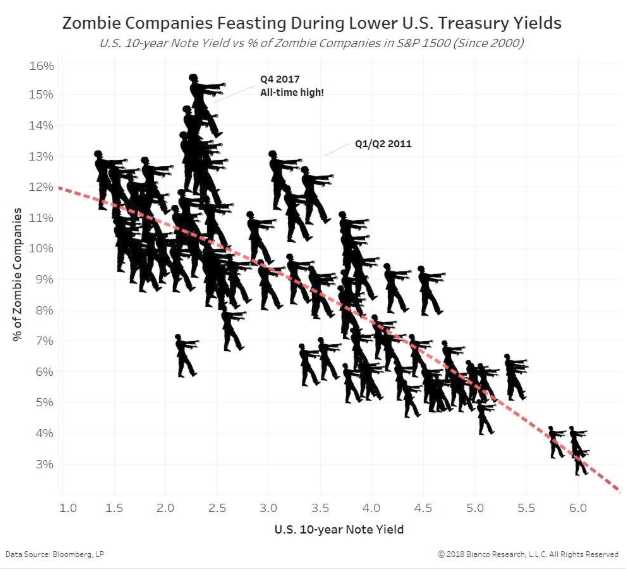 Now imagine what will happen once rates will hit -5%. Well Economy finally says it’s not possible IMO. Money printing is finding its end at the end of the bubble. Kondratiew clearly told that there are couple of points you need to look at :

So what actually happened? Debt is deflationary. It means it destroys the financial system. Central Banks try to do magic telling they want inflation and more debt. One is against each other and unsustainable. Deflationary phase (1980-2019+) causes huge erosion of basic human values. We replace family to being single, we replace friendship for consumption and show off, because it’s easier. I hope you are not suprised if you see how many births were given in 2018? You think debt will cause more children to be born? Let’s see :

You won’t believe it. We’re moving back to 1929. It seems only socialists era / inflationary era forces people to give more births. The problem seems to be again in psychology. Life is harder in inflationary environment and socialism is keeping a hand on everyone to be equal, but it might be a topic for other time.

At the end I’ll show you one more chart. Just take a look and guess what level of FED Funds Rate is needed to sustain healthy balance between dignified employee wages and corporate profits. Maybe that will be your homework, but rates should have never drop below this level :

The paradigm of negative rates and more QE is quite interesting, because it is like this.

Corporate profits will go to infinity and employee compensation will go towards zero, so corporates will make tons of money on zero consumption.

This article is not about gloom & doom. It’s about how economy works. Will Central Banks find a way to get out from the mess? I hope so, but I don’t think they will be able. Best asset allocation for deflationary period is physical cash and physical gold, so I assume two assets nobody even wants to look at. In the worst case scenario all ETFs will have to be frozen, pension funds will have to blow up, probably EURO Zone will break and China will explode and most of people won’t take their money from their accounts. We’ll lose 20 next years, but we still believe in money printing and Central Banks PUT. Nobody has beaten the economy. It’s like trying to remove a gravity from the earth and play against physics. This article should be just a warning sign. To think to prepare or to have a little bit more knowledge about what’s going on around.

I hope they will reverse the economy cycle, but I’m just prepared with appropriate asset class.